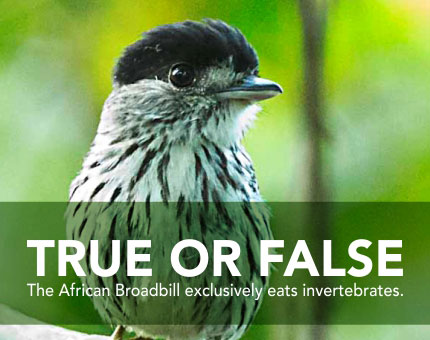 The African Broadbill exclusively eats invertebrates, foraging on the ground, in trees and occasionally in flight. The following food items have been recorded in its diet:

The African Broadbill is locally common although difficult to see, as it is extremely inconspicuous, remaining motionless on its perch for long periods. It usually occupies coastal evergreen or lowland forest, deciduous thickets or dense woodland. Both sexes build the nest, which is an oval-shaped structure with a side entrance, made of bark, dry leaves, twigs, grass and rootlets, often held together by strands of spider web. It is not concealed, in fact hangs conspicuously from a low branch of a tree, usually about 1.5-3.0 m above ground.

Not threatened globally, however it has been badly affected by deforestation in southern Mozambique and KwaZulu-Natal. The population is suspected to be in decline owing to on-going habitat destruction.